Inspired by a remark by LRJP! and created with the help of Atom Smasher’s Error Message Generator.

A selection of testimony and opinion pieces – reflecting a range of views – which have appeared online over the last three weeks.

Gary Younge, The west owes Haiti a bailout. And it would be a hand-back, not a handout, Guardian, 31 January 2010.

There are so many trapped in the rubble of rational thought which tragically collapsed this week in parts of Europe and North America. Can someone help Lord Griffiths of Fforestfach?

I can hear him calling out. What is he saying? ‘The fatalism inspired by the voodoo religion would militate against recovery’.

Unlike, presumably, the fatalism inspired by the removal of a democratically-elected president. Twice.

Nothing he is quoted as saying seems to admit that ‘fatalism’ may have secular as well as spiritual sources. And is it really so inconceivable that people combine vodou – or any other religious – beliefs with activities like making a living, bringing up children, going to school, getting involved in community projects, or pulling people out of wrecked buildings and caring for them? Can’t we at least agree that it just might be possible?

I hear an echo. What’s that? ‘There is the influence of the voodoo religion, which spreads the message that life is capricious and planning futile.’ David Brooks on The Underlying Tragedy in the New York Times. Couldn’t he have said the same thing about the global financial crisis? In any case, it sounds like David Brooks is spreading that message well enough himself.

And then there are Tyler Cowen’s scatter-gun hypotheses that try to answer the rather loaded question Why is Haiti so poor?. They include this intriguing suggestion:

Hegel was correct that the “voodoo religion,” with its intransitive power relations among the gods, was prone to producing political intransitivity as well. (Isn’t that a startling insight for a guy who didn’t travel the broader world much?)

Cowen is actually not the only one for whom Hegel has recently become an authority on Haiti (and I will return to this in a future post), but he is unusual in claiming that this is because of the philosopher’s alleged views on voodoo.

That word again. It’s been around for a while, though it’s not as old as Hegel, at least not in this spelling. In The V Word I tried to show how voodoo emerged victorious in English in the late 19th Century over French or Creole versions like vaudoux or voudou. And in doing so it rapidly mutated as a metaphor that took it far from the island of its birth to refer to practically anything that was inexplicable or malicious or both.

At the same time the religion attracted the interest of more sympathetic scholars (inside and outside Haiti) and by the 1980s and 90s, something of the reality of vodou – to adopt the spelling in the language spoken by most of its followers – had seeped into the Western mainstream, and its difference from the cartoon voodoo was recognized by anyone who gave serious consideration to the matter.

I suggested that the two forms had diverged to the extent that we could afford to relax. Almost no-one used voodoo to define Haiti anymore. The word had drifted away from its Caribbean moorings to harmlessly scare (or lure) a world blissfully ignorant of where it came from. And we could begin to expect that discussions of the religion – given official recognition by Jean-Bertrand Aristide in 2003 – would be more likely to dignify it with the name vodou,and treat it accordingly.

But I may have been proved wrong. Last week the ghost returned, as those who sought facile explanations or excuses for the desperate scenes unfolding in the media seemed to find a large captive audience willing to accept them.

How much it will be allowed to haunt the efforts of emergency relief and reconstruction remains to be seen. At least that captive audience is now beginning to answer back.

It started as a long line that went all round the kitchen but it was a bugger to photograph. Next time we’re going to get the police to stop the traffic and set up a procession down the middle of Byres Rd. And then I’ll apply to art school. 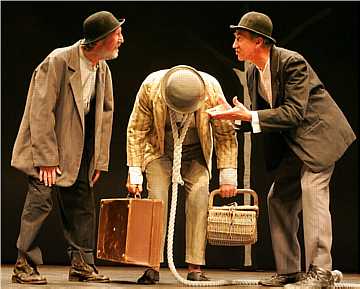 estragon: What did we do yesterday?

vladimir RT @estragon: What did we do yesterday?

Evan Williams has posted this response to criticisms of the experimental retweeting feature on the Twitter website.

Citing other people’s tweets is as old as Twitter itself and takes many different forms. The new feature is an attempt to provide an alternative to this well-established ‘organic retweeting’ that is easier to use and and that avoids some of the problems associated with it. These include attribution confusion, noisiness, untrackability, redundancy, and the fact that the results are often ‘mangled and messy.’

To me, this doesn’t sound like a case for an optional alternative to organic retweeting but a rather nervous moral condemnation of it. Of all the problems, it seems as if those relating to attribution are fundamental. The post seems particularly concerned that people can be made to say things they didn’t and that things they do say can easily be misread as someone else’s. In other words, the ‘mentions’ in retweeting – the references to the original author’s username (or authors’ usernames if one is retweeting a retweet) – are often inaccurate or misleading.

I think this misses some important aspects of how retweeting actually works. What if we thought of retweeting not as a threat to the integrity of a tweet but rather a creative practice that adds value to it? Consider this fictional example:

hamish Is anything worn under the kilt? Nae, madam, it’s all in perfect working order!

tyrone RT @hamish: Is anything worn under the kilt? Nae, madam, it’s all in perfect working order!

A straight retweet, we might say. But, as the patron saint of retweeters would no doubt remind us, there is no such thing. Tyrone takes this joke from Hamish’s timeline and copies it into his own, giving it a different meaning in a new context. And a meaning that will change as Tyrone follows it with more tweets – or retweets – of his own. Tyrone may be inserting the joke in a series of tweets on a related topic (say, the trials and tribulations of hiring an outfit for a friend’s wedding or amusing photos of his recent Scottish holiday). Perhaps Hamish is one of Tyrone’s followers, and offered the joke as an implicit invitation to retweet it, given its relevance to the subject currently absorbing him. Alternatively, it may serve to purposely lower the tone after a number of what Tyrone fears might have been overly serious or pretentious updates. Or mark the end of a light-hearted sequence before turning to weightier matters. Or Tyrone might be one of those who fires off seemingly random tweets on a wide range of subjects at regular intervals without rhyme or reason.

Furthermore, retweeting is not always an endorsement or appreciation of the original. In this case, Tyrone may be prompted by a desire to share a good joke. But he may wish to remind us of a particularly bad one. In other words, one can retweet ironically – though the irony may be lost on those who don’t follow Tyrone closely. So the retweeter is always – intentionally or not – always adding something even when quoting verbatim. And for that, the ‘original’ author cannot take all the credit. Even when they are the ‘original’ author – which, in this case, Hamish certainly isn’t. Indeed the joke is an old one, and frequently attributed to Spike Milligan.

So when Tyrone credits Hamish, is this confusing? No, because the mentions in retweets are acknowledgements rather than attributions. The difference is important. For something is worth retweeting regardless of who wrote it first. Retweets are not usually intended as (or taken to be) representations of the retweeted, who are often not known to those reading the timeline in which they occur – although they may lead the reader to check out their profile and even follow them. Tyrone makes Hamish’s tweet – however briefly – his own. And immediately makes it available for retweeting again. For this creative quoting and requoting, the @hamish is a nod recommended by etiquette. It should not be expected to meet the standards of a citation required in a research paper.

I would emphasize this is true even when the retweet is verbatim. But, of course, a retweeter may abridge, annotate, paraphrase, tag or otherwise transform the original:

tyrone I’d forgotten this – RT @hamish: Is anything worn under the kilt? Nae, madam, it’s all in perfect working order!

tyrone RT @hamish: Is anything worn under the kilt? Nae, madam, it’s all in perfect working order! LOL

tyrone RT @hamish: Is anything worn under the kilt? No, madam, it’s all in perfect working order!

tyrone RT @hamish: Is anything worn under the kilt? No, your holiness, it’s all in perfect working order!

tyrone RT @hamish: Is anything worn under the kilt? Nae, madam, it’s all in perfect working order! #worldsworstjokes

Abridgements and minor corrections are usually made silently, but annotations and interpolations and additions are more likely to be clearly identified. So the last one might be more fairly retweeted as follows:

tyrone RT @hamish: Is anything worn under the kilt? Nae, madam, it’s all in perfect working order! >> #worldsworstjokes

tyrone Is anything worn under the kilt? Nae, madam, it’s all in perfect working order! #worldsworstjokes (sorry @hamish!)

These often add value to the ‘original’ even if not always appreciated by the first author. And this is complicated by the fact that tweets are themselves compounds and which part of the tweet is supposed to bear the weight of the retweet is significant. For instance, imagine the first tweet came with a link, thus:

hamish Is anything worn under the kilt? Nae, madam, it’s all in perfect working order: http://bit.ly/2oazeb

Now this link is to a video clip. One would not be surprised to find it to be a clip in which the joke appears or (as here) in the brief description provided by the person who uploaded it. It could be that the body-text of the tweet serves here as a caption for the clip, encouraging more to click on it (than would if the tweet had consisted only of the link). But equally the clip may have been added almost as an afterthought, as a kind of illustration of the joke.

Tyrone may retweet primarily in order to draw attention to the clip and, not impressed with the joke, may share only the link:

Or supply new accompanying text of his own:

Alternatively, not impressed by the clip, he may choose to share only the joke:

tyrone: RT @hamish: Is anything worn under the kilt? Nae, madam, it’s all in perfect working order!

Or add a different link:

tyrone: RT @hamish: Is anything worn under the kilt? Nae, madam, it’s all in perfect working order: http://bit.ly/VAl8W

Sometimes the changes may warrant a more relaxed via @hamish rather than the more formal RT @hamish. But it is not often clear when to prefer one over the other. There is no obvious marker on what is a continuum of creative borrowing. The finely-tuned aphorism or critical judgement must often be extracted from a longer or less elegant tweet before it is retweeted.

Williams speaks up for those who struggle with what he calls the extra ‘mental parsing’ that is needed to compensate for the scandalous reappropriation of a tweet by a retweeter. The same people, perhaps, who are disturbed when their carefully-chosen friends pervert their own timelines by quoting the words of others. ‘The perfect Twitter would show you only the stuff you care about,’ he writes.