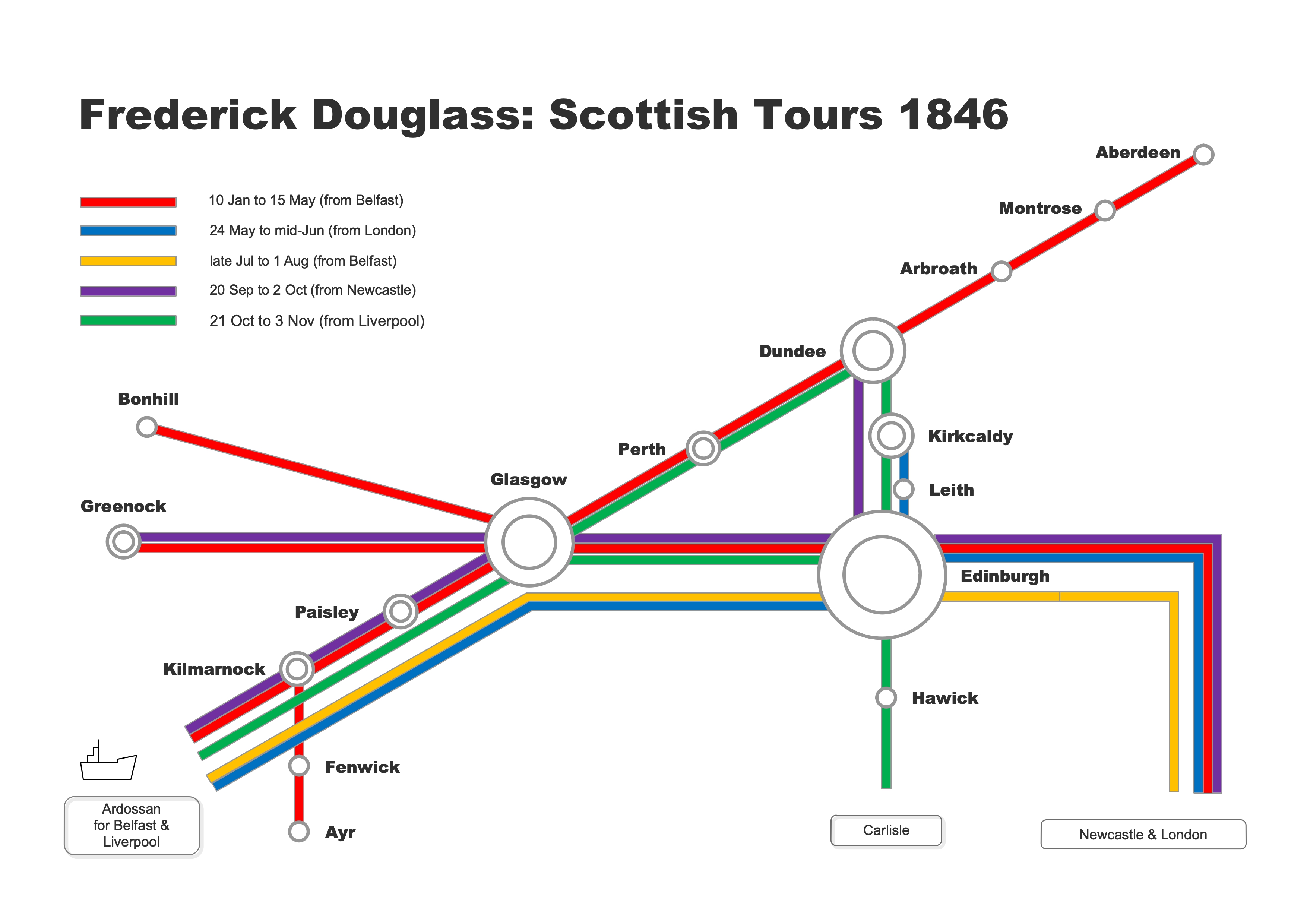 Douglass made several tours of Scotland in 1846, the first and longest lasting four months. He spent a total of nearly six months in Scotland between January and October, addressing at least seventy meetings, probably many more.

Full texts of newspaper reports of meetings addressed by him will be added to this site during 2019, starting, on 15 January, with his first speech in Scotland, the one he gave in Glasgow on 15 January 1846.

Douglass and his fellow campaigners spoke mostly at two kinds of venue.

They also addressed audiences in numerous churches, usually belonging to the United Secession Church or the Relief Church (the two denominations merged in 1847 to form the United Presbyterian Church). Most of these church buildings have since been demolished or rebuilt beyond recognition.

In drawing up a list of his speaking engagements, my starting point was the list published in The Frederick Douglass Papers. Series One: Speeches, Debates and Interviews. Volume 1: 1841-46, under the general editorship of John W. Blassingame (New Haven: Yale University Press, 1979).

But some meetings are listed there which certainly did not take place: Douglass did not accompany fellow anti-slavery campaigner Henry Clarke Wright on his tour of the Borders in March and April, for instance. I have not included them here, nor a few others for which I have been unable to find independent confirmation. On the other hand, I have found evidence of meetings which are not listed in the Frederick Douglass Papers.  For more details of evidence used to identify meetings and locations  (still the subject of ongoing research) see Douglass: Speaking Engagements working document (pdf).

Some important local history research has revealed interesting details about the places Douglass spoke at in Greenock and Fenwick.

For a broader picture of Douglass’ tour of Britain and Ireland, see Hannah-Rose Murray’s excellent Frederick Douglass Map.  In October 2018 the National Library of Scotland produced interactive maps showing the locations where Douglass and other black abolitionists spoke in Scotland.

An asterisk indicates that the exact date is not certain. One may assume the meetings took place in the evening unless specified otherwise.

Where the venue is known, I have tried to link it to a matching record in the Canmore database of historic sites and buildings in Scotland, which gives its precise location and often provides some history of the site or building in question (although the record does not always recognise its use in 1846). Another useful resource is the Dictionary of Scottish Architects 1660-1980 where you can search for buildings as well as architects.

Accompanied by his white abolitionist friend, James Buffum, Douglass arrived in Ardrossan from Belfast on Saturday 10 January and proceeded by train to Glasgow.

Douglass left for London on 17 or 18 May to attend the anniversary meeting of the British and Foreign Anti-Slavery Society, although he had scheduled meetings in Kirkcaldy (19 May) and Edinburgh (20 and 22 May), which went ahead without him. He returns on 23 or 24 May.

His next known engagement was in Belfast on 16 June. He was back in Liverpool on 4 July seeing off his friend Buffum, heading back to Massachusetts, after which he returned to Belfast for the General Assembly of the Presbyterian Church in Ireland. Douglass then sailed to Ardrossan and thence to Edinburgh via Glasgow.

Douglass left Edinburgh for Newcastle on 1 August, and thence to London where he met William Lloyd Garrison, newly-arrived from Boston. The following month they both travelled to Scotland, but while Garrison travelled direct from London to Glasgow, arriving on the evening of 19 September, Douglass spoke in Sunderland on 18 September and did not rejoin him until 21 September. They had hoped to speak at City Hall, Glasgow on 21 September, but the meeting had to be postponed because the building ‘was to be occupied during the week with an exhibition of statuary.’

Douglass and Garrison then took the overnight steamer from Ardrossan to Belfast, where they spoke on 3 October. After speaking in Liverpool on 19 October, Douglass, Garrison and George Thompson took the train to Fleetwood on 20 October, then the overnight boat to Ardrossan, and headed for Edinburgh via Glasgow arriving just in time for the evening meeting.

The next morning Douglass took the morning coach south. He was one of many supporters who saw Garrison off when he departed from Liverpool for Boston on 4 November.