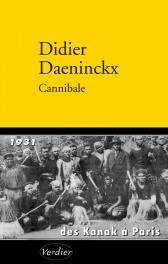 For a period of over fifty years, many thousands of people were conscripted to be exhibited as caricatures of themselves in the various world fairs, mostly in Europe and North America. They came from Africa, Asia, the Pacific and the Arctic. One of the first was the ethnic village at the Paris World Fair in 1878; and these so-called ‘human zoos’ were staged frequently until at least the Second World War.

From contemporary documents we know something of the way these events were planned and managed, and the reactions of visitors. But very little testimony of the people on show have made their way into print. A notable exception is the diary of Abraham Ulrikab, the father of one of two Inuit families who were taken to Hamburg in 1880 and who embarked on a tour of several European cities that winter during which they all died of smallpox because their handler forgot to vaccinate them.

This book concerns the Colonial Exhibition held in Paris in 1931. It offers a fictional reconstruction, narrated by Gocéné, one of the Kanaks shipped from Melanesia to people an ethnic village. While Daeninckx gives Gocéné every opportunity to dwell on their appalling treatment by the organisers, he chooses to avoid portraying him as a hapless victim of circumstance. Most of the novella takes the form of a thrilling adventure, which ensues when he and his friend Badimoin hear that some of their compatriots have been selected to be taken on a bus tour of city. Distressed at their unannounced departure – especially because Badimoin’s cousin Minoé is among them – the two friends decide to escape from the Exhibition and try to catch up with them.

Their unfamiliarity with Paris – they come across a Metro station but are hesitant to descend into the unknown, for example – makes Gocéné’s narrative resemble those satires that render Europe strange in the tradition of Montesquieu’s Persian Letters. But the pace picks up as the two men hear that the sight-seeing tour was a ruse and that Minoé and the others were actually on their way to Germany (in a deal struck between the Exhibition organisers and a circus in Frankfurt).

They make their way to the Gare de l’Est where – after a bizarre encounter with a Salvation Army band – they arrive just too late to intercept the train. By this time the police are in hot pursuit and in the nick of time they are saved by Fofana, a Senegalese cleaner, who conceals them. When they ask why he helps them, Fafana explains how he always sides with the noirs when they are chased by the police and recalls how the white officers sent many of his comrades to their deaths in the trenches during the War. Out of immediate danger, they emerge from their hiding place and after learning that there is not another service to Frankfurt for several days, they return, disheartened, to the Exhibition.

The episode will end tragically, but not before the two friends are astonished to see a protestor gatecrash the compound and denounce the cruel charade of the exotic performance. Echoing the words of a famous tract printed at the time and signed by André Breton and others, she appeals to the visitors, ‘Don’t Visit the Colonial Exhibition’.

If Deaninckx is keen to emphasise the various ways in which both the Kanaks and Parisians resisted and challenged the Exhibition, he also situates the episode in a longer history. For the novella begins with Gocéné as an old man in the 1980s, back home in New Caledonia, in the midst of the armed struggle to win independence from French colonial rule. He tells the story to two rebels at a roadblock who want to know why he is travelling in a car with a white man. His companion, it turns out, played a decisive role in the events in Paris with which the novella culminates. And now, in his retirement, has succeeded in renewing his acquaintance with Gocéné, and has travelled to the Pacific to meet him.

In a later edition of the novella (which includes a sequel, Le detour d’Ataï) the author notes that just a few months after it was first published, the Kanak footballer Christian Karembeu was in the French team that lifted the World Cup at the Stade de France. His great grandfather was Willy Karembeu, who makes a cameo appearance in the book as he was one of those taken to Germany from the Exhibition in 1931.