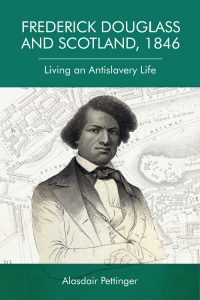 Frederick Douglass (1818–95) was not the only fugitive from American slavery to visit Scotland before the Civil War, but he was the best known and his impact was far-reaching. This book shows that addressing crowded halls from Ayr to Aberdeen, he gained the confidence, mastered the skills and fashioned the distinctive voice that transformed him as a campaigner. It tells how Douglass challenged the Free Church over its ties with the Southern plantocracy; how he exploited his knowledge of Walter Scott and Robert Burns to brilliant effect; and how he asserted control over his own image at a time when racial science and blackface minstrel shows were beginning to shape his audiences’ perceptions. He arrived as a subordinate envoy of white abolitionists, legally still enslaved. He returned home as a free man ready to embark on a new stage of his career, as editor and proprietor of his own newspaper and a leader in his own right.

Shortlisted for the Saltire History Book of the Year 2019

We have long known about the significance of Frederick Douglass’s visit to Britain and his activities in Scotland in 1846, but Pettinger calls on us to look beyond what we know, and in doing so takes us on an exciting intellectual excursion at the end of which we are left with a much deeper understanding of the ways those months spent in Scotland helped to sculpt the man who is now recognized as one of the great figures of 19th century history. – Richard Blackett, Vanderbilt University

… an exemplary intellectual, political, social, cultural, and ideological investigation into Douglass’s many lives as lived in Scotland. As the first full-length and exhaustively researched study of Douglass’s visit to Scotland in 1846, Pettinger’s volume is to be highly commended for its innovative literary, cultural, and philosophical analyses and for its effortless mapping of Douglass’s transatlantic life and works. – Celeste-Marie Bernier, University of Edinburgh, Scottish Literary Review, Vol 11 No 2 (Autumn/Winter 2019) [Link to full review]

Frederick Douglass and Scotland is an ambitious and highly original work that is an exciting new addition to the historiography. It addresses both the need for more recognition of Douglass in Scottish historiography, and also of Scotland in studies of Douglass in the United States. It is thoroughly researched, and the author does an impressive of using source material to reveal Douglass’s visit to Scotland as a truly transformative episode in the abolitionist’s life. – Shaun Wallace, University of Bristol, History Scotland, Vol 2 No 2 (March/April 2020) [Link to full review]

There is much to be admired in this book. Pettinger constructs a compelling narrative, all the while remaining faithful to a wide array of contemporary sources. His style is clear and inviting, evidenced – for example – by the image-laden prose used to describe the scenes Douglass would have taken in during his first days in Scotland. He also interacts constructively with the growing body of work on Scotland’s connection to slavery, including the output of Tom Devine, Michael Morris, and – with particular reference to the Free Church and slavery – Iain Whyte. The front and back matter also add to the book’s appeal. The introductory Dramatic Personae enlivens the book from the beginning, preparing the reader for what unfolds in the chapters that follow. The appendices and maps at the back add yet another level of detail, and aid the reader in placing Douglass – and themselves – in the unfamiliar cityscapes of Victorian Scotland. – Andrew Jones, Kennesaw State University, Scottish Church History, Vol 49 No 1 (April 2020) [Link to full review]

It seems utterly mind-blowing that W L Andrews’s otherwise excellent Oxford Frederick Douglass (1995) brought out in the 150th anniversary of the trip to Britain and Ireland contained not one letter or speech from the visit. Pettinger’s masterly study of his epochal visit to Scotland fills in some of those gaps with a comprehensively researched treatment of topics such as phrenology, his interest in photography, blackface minstrelsy and centrally the Free Church of Scotland and Douglass’s ‘Send Back the Money’ campaign that was so important to his maturation as an independent political figure. – Alan Rice, University of Central Lancashire, Journal of American Studies 54 (2020). [Link to full review]

This referenced and illustrated book is very well written and it includes an extensive bibliography. It should appeal to a broad spectrum of readers … The author provides a fascinating analysis of the impact of contemporary Scottish culture on Douglass (and vice versa). – Eric Graham, Scottish Local History 109 (Summer 2021) [Link to full review]

Pettinger’s vast research into Douglass’s speeches, correspondence and autobiographies enables him to foreground clearly Douglass’s agency in his transformation … Overall, this is an important addition to the scholarship on Douglass and abolitionism in the US. But equally, in calling to light the fact that Douglass did not come to Scotland to congratulate the people on ‘having broken with a slavery past, but to accuse them of a continued alliance with a slavery present’, Pettinger also provides an important contribution to the transatlantic scholarship examining Scotland’s role in slavery. – Nicola Martin, University of the Highlands and Islands, Scottish Historical Review, Vol 100 No 2 (August 2021). [Link to full review]

Anyone wanting to get a better sense of the significance of this period in Douglass’s life, both for Douglass himself and for understanding early Victorian Scottish religion, abolitionism, and racial attitudes, will be grateful for this book. Pettinger’s Part , “Douglass, Scott and Burns,” is the most obviously relevant here, but the whole story of Douglass’s Scottish lecture tour will suggest new connections both for Scottish Victorianists and for scholars of mid-19th century America. – Scott Patrick, Studies in Scottish Literature, Vol 47 No 2 (2022). [Link to full review]

A digital edition is available via University Scholarship Online, which is free to access for members of university libraries which subscribe to this database; also for registered readers of the National Library of Scotland whose main address is in Scotland.

The paperback may be ordered from Hive (the online portal for independent bookshops in the UK) for £18.89.