Reporting on his 1960 visit to Cuba, C Wright Mills did not write a conventional travelogue or journalistic account. He chose to have his book narrated by a composite Cuban revolutionary, and it consists of a series of letters addressed to his North American readers. ‘Most of the words are mine,’ Mills writes in his introduction, ‘– although not all of them; the arguments, the tone, the interpretations, the tang and feel – they are in the main directly Cuban. I have merely organized them – in the most direct and immediate fashion of which I am capable.’

The result is a powerful defence of the revolution, which calls upon its readers in the US to challenge the ‘Yankee imperialism’ that is being pursued in their name and to support this brave experiment that seeks to pursue a middle way between Capitalism (which ‘sacrifices man’) and Communism (which ‘sacrifices the rights of man’) .

The book caused quite a stir at the time and sold close to half a million copies. But it is hardly known today. Listen, Yankee is out of print and has not attracted anything like the critical attention paid to Jamaica Kincaid’s A Small Place, an equally passionate challenge from the Caribbean that accusingly fingers a similar audience, and with which it might be usefully compared.

The vocabulary used in this collection is perhaps best characterised by what it excludes. There is very little non-standard or ‘new’ English here, very little dialect, vernacular, slang, other languages. The use of proper names is tightly controlled – a few places and people here and there; certainly almost no trace of current affairs, brands, popular culture. It goes without saying that no one talks like this – no one could get far in everyday life with such a restricted stock of words – but it is unusual to find even poetry like this today.

This is one reason why Burns’ poems seem so fragile and precious. It seems almost unbelieveable that they can hold off the teeming heteroglossia that surrounds them. It is certainly noticeable when a slightly low word like ‘shove’ appears (‘An eighteenth-century experiment’) or a slightly specialized one like ‘felucca’ (‘A homecoming’), while the rare specificity of ‘Silloth’, ‘Carstairs’, ‘Cold War’, and ‘Nazis’ draw you into geography and history. And for me these moments give an extra pleasure, not least because they gently remind you that the collection’s persistent themes (bereavement, creativity) always emerge from the evocation of a particular place and time even if the reader couldn’t pin them them on a map or a calendar.

But the most characteristic feature of Held – its signature, even – is its astounding ability to span centuries and continents in a few lines, as the observation of something so humble as a stone coffin, an excavated trench , a river approaching the sea, gives way to a glimpse of its distant past or possible future.

In ‘Transport’, for example, an image of barges laden with gunpowder pulled by horses takes us back to the crofters gathering the kelp ash used in its production and forwards to the sea voyage and explosions on the other side of the ocean. ‘History’ combines in one view – and a sublimely condensed apprehension of human and geological time-scales – the ruins of an abbey and a nuclear power station, ‘whose indestructible / waste is in the seabed where layers of sediment / became the quarried sandstone, heaved over salt marsh // to be turned into an abbey.’

The front cover of the book features a white porcelain moon jar in the British Museum (and the subject of one of the poems), but the material objects in these poems are not trapped in a display case; they are invested with labour, love, power and suffering. As the title suggests, it’s what’s inside them, the secret biographies they harbour, that counts.

Sometimes, it is true, the poems themselves seem a little too laboured and unconvincing. The metaphor of portrait and sitter in ‘Diptych’ feels overextended so that its point becomes unclear. The historical sweep of ‘Holy Water’ from mediaeval monks to nuclear subs packs in more descriptive and explanatory clauses than it needs, I think. And the collection closes with ‘This life’ – whose title I imagine unwittingly duplicates that of the cult TV series: it is the only time we find ourselves in an urban environment, and I wonder if it isn’t just its protagonist (a characteristic ‘you’) but the writer herself who feels uncomfortable there, as she slips into a series of glib, short, generalizing nouns before resting more sure-footedly on the sensuous particular: ‘… but this life with its city streets, // its fizz and mix and mess, its rush of sweet-pea scent, / the lightness of their petals, their brief and lovely bloom.’ 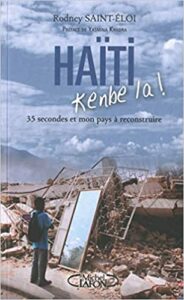 Like Dany Laferrière’s Tout Bouge Autour De Moi, this is a first-hand account of Haiti’s earthquake by a Haitian-Canadian author who was in Port-au-Prince for the Etonnants Voyageurs book festival in January 2010.

Neither has yet been translated into English, but they should be. For many years now it has been customary to tag Haiti as ‘the poorest nation in the Western hemisphere’ in foreign news reports, and coverage of the earthquake often reinforced the tendency to treat the country and its people as victims who can do little to help themselves. Neither the sour commentaries of those who blame Haiti’s misfortunes on an endemic fatalism so often attributed to ‘voodoo’ nor the well-meaning efforts of the thousands of NGOs who provide aid ‘from above’ contribute much to the vital task of extending and strengthening democratic participation in a society dominated by a tiny rich elite; indeed, they have been accused of deliberately thwarting it.

Saint-Eloi does not confront this situation head-on. He is a poet and publisher (he runs Mémoire d’encrier in Montréal) not a grassroots activist, and although he returns frequently, he has not lived in Haiti for more than a decade. Accordingly, his perspective is that of a visitor. The narrative begins in media res as he drifts in and out of sleep on the tennis court of the Hotel Karibe where he and the other guests spend the night after being forced to evacuate when catastrophe struck the previous afternoon. In the course of the book, we meet a large cast of characters, including fellow writers (many of them, like his friend Dany, put up at the hotel by the festival) and members of his family, as he moves about the city observing scenes of devastation and the efforts to rescue the living and bury the dead.

Despite the sloganistic title (a popular Kreyòl expression meaning ‘Never Give Up!’), Haïti, kenbe la! is an episodic collection of low-key personal impressions and recollections. Children amuse themselves with water pistols; a woman’s naked body is found the arms of her illicit lover and her husband buries them together; a radio announcer reads out the names of survivors; a policeman who avoids injury because he is late for work; ways of concealing the smell of death; the sound of hymns, prayers; thieves ransacking a displacement camp; journalists taking photos of corpses. The city takes shape through the accumulation of telling details. And indeed Saint-Eloi compares his method of composition to the way his mother in New York synthesizes information from many different sources in order to construct the compelling story of the earthquake she tells him over the phone.

After a couple of nights, he moves out of the hotel and stays with friends in a house overlooking a makeshift camp. They ration their food, but allow themselves a bottle of wine now and again. Before the week is out, Saint-Eloi is offered a seat on a military aircraft flying to Montreal, alongside other Haitian-Canadians – but only those with a Canadian passport are permitted to leave.

He allows many voices to speak – often without comment, giving us a Haiti in which different faiths vie for attention, and a strongly patriotic sense of history coexists alongside a cynical dismissal of current leaders, where the overseas aid represents relief for some and suffering for others, and the possibilities offered by emigration forms the horizon of so many lives. Through the story-teller Grann Tida, Saint-Eloi suggests Haiti has long represented to outsiders either the appealing primitive or the threatening savage, but it has also answered back. ‘Touris pa pran pòtrè ‘m’ (‘Tourist, don’t take my picture’) she says, quoting Felix Morisseau-Leroy’s famous poem, while conceding that it is not likely to have much effect.

Yet if the tourist would read this book, perhaps another Haiti could come into focus, one that is not designed to answer the outsider’s hopes or fears. ‘Resilient’, perhaps, although Saint-Eloi bristles at such an abstract concept. This Haiti is essentially one in which people just get on with things. A Haiti that lives for the present. If you fall, you get up – an attitude illustrated by the new neighbours in the ‘village’ that sprung up near his temporary home in Delmas: Zaka and his friends, playing dominoes, slamming down the tiles, their everyday chat – music, carnival, women, the price of rice and corn – punctuated with bursts of laughter.

But the hero of the book is undoubtedly Franketienne (who in Rapjazz: Journal d’un paria has recently written his own, rather more poetic, tribute to the city). We first meet the writer and artist hard at work rebuilding his house in Port-au-Prince. Later, Saint-Eloi takes a call from him in Montreal. He jokes about the Nobel Prize everyone expects him to win and reads a passage from his new play which is soon to be produced in Paris.

Some other first-hand accounts of the earthquake are included in Haiti Rising: Haitian History, Culture And The Earthquake Of 2010, edited by Martin Munro.