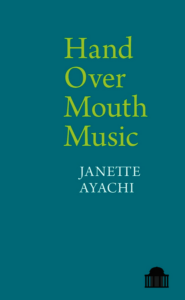 Hand Over Mouth Music is an intriguing name for a collection. The title poem suggests that it signifies silence – the music that is inhibited because a hand is over one’s mouth; a silence, or at least a song without words. But it also nods to puirt à beul for this too is music without words, sung sounds, and associated with women’s work, and therefore perhaps a metaphor for domestic labour performed without fuss, if not entirely willingly, and thus signifying dissent too. ‘This is their blues, a work song without words,’ she writes, dwelling on the activities of the women at her father’s second wedding.

Music runs through other poems too, but in other keys or registers. In ‘Dean Street Gardens’, ‘a man practices chanter-song as he walks his dog / tapping the sheet music with his wedding ring’. And ‘Aria’, which forms part of a sequence about pregnancy and childbirth, begins: ‘Since my surrender to the cadenza / of the spearmint midwives’. The motif continues in the next (‘Lyra’) with its opening lines, ‘The first night you curled in our bed / like a loose semiquaver’.

The collection shuttles between Algeria and Scotland. The former in a cluster of poems that seem to have been inspired by visits to the author’s father’s family – visits where the ‘flight back home’ is never far away (‘Youma and the Three Kings’). On either side are poems set explicitly in Glasgow and Edinburgh. I especially liked ‘Falling Asleep On Your Last Memory’ which provocatively takes the side of the usually demonised gulls and pigeons in Princes Street Gardens, finally addressing them directly: ‘Let your wings graze the cheeks of tourists with an undertaker’s caress’. If the prose fragment on ‘Merchant City’ is an indication of what we can expect from Ayachi’s forthcoming nonfiction memoir about travelling alone, then we are in for a treat.

There are some intriguing premises for poems here – ‘On Keeping a Wolf’, for one, and ‘Closed Doors’, about a furtive snog in a lift – ‘until / doors open like a dropped book / spilling its forbidden pages.’ More daring is ‘Lawrencium’, addressed to the chemical element; another explores the idea that days are like different birds, some of them with broken wings; and there are interesting renditions of geography (‘Adriatic Sea’, as if viewed in an atlas rather than in the flesh) and ‘Father’s Biography’ (the – overlapping – phases of his life counted mechanically in numbers of years).

The reader feels compelled to pause frequently over striking phrases, their meaning almost giving way to pure sound: ‘double cello echo’ (‘St Kilda’), ‘hovering with offerings’ (‘Youma and the Three Kings’). Who could fail to be captivated by the Mallarméan magic that produced ‘a scriptorium of futuristic mannequins’, followed a few lines later by ‘a planetarium of medusae’? But sometimes these are not enough to lift those poems whose organising principle is obscure – poems that neither tell a story, nor capture a moment, nor pursue a line of thought and instead seem only to offer a stream of consciousness of merely private significance. The opening poem, ‘I Laughed So Much I Lost My Voice’, is a case in point, which is unfortunate, as one expects the first in a collection to be the strongest.

But stay with it. There is plenty to delight you here, even if the finest poem in my opinion is the last one, ‘Sea-Rattle’. Here the sea approaches the tenement where the poet is and engulfs it, nature taking its revenge perhaps, recalling the Edinburgh gulls. Every word chosen and weighted carefully – and it is printed double-spaced as if to force you to read it more slowly. Although broken into sentences, the lines rise in intensity as if in a single wave until ‘lungs inflate and learn to speak. I hold my breath, / listen to their oscillations and swim towards the sky.’