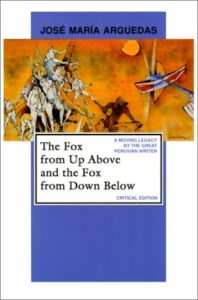 I love this novel. Even on a first reading – when it is obvious that you’re going to miss so much – it is a hugely rewarding experience.

The author‘s death tends to overshadow the interpretation of the book – as a kind of extended suicide note – but I enjoyed it above all as a brilliant and complex contribution to the literature of place. There is a large cast of memorable characters here, but the main character is surely Chimbote itself. Their criss-crossing journeys across the city offer the reader the opportunity to view it from many different angles, and the result is a remarkably sophisticated exercise in social, economic and political geography. The uneven distribution of power and wealth is quite visible in the layout of the conurbation and its lines of communication. Trawler, brothel, factory, market, cemetery: these are not simply settings in the novel but locations whose capacity to shape the action that takes place there is of crucial significance.

On some level the novel, with its passing derogatory remarks about Cortazar, Carpentier, Fuentes and Garcia Marquez, is also a provocative challenge to the mainstream Latin American novel, which certainly looks hopelessly gentrified after reading this unsparing immersion in the lives characters that include an itinerant preacher, a popsicle vendor, a prostitute expecting a baby, a crooked businessman, an unscrupulous factory manager, a corrupt labour leader, a pig-raiser, a trawler captain, a Yankee priest and a former peace corps volunteer who has gone native. Only the editorial apparatus can indicate how Arguedas combined Spanish and Quechua in his text, often creating new words from both languages, but the translation gives a good impression of the range of sociolects as it switches expertly between standard and vernacular Englishes.

If the book takes its title from a Quechua myth and while the narrative duplicates its themes of ‘above’ and ‘below’ in its fascination with the complex encounter of the mountain-dwelling Indians who are drawn to work in the rapidly industrializing port on the coast, the relation between the two stories is not merely analogical. One of the foxes appears in the novel as a somewhat enigmatic character, and it may be that Foxes is a critical rewriting of the myth, answering it back, out-doing it perhaps. Whether a second reading will make this any clearer I don’t know, but it will certainly be just as compelling.