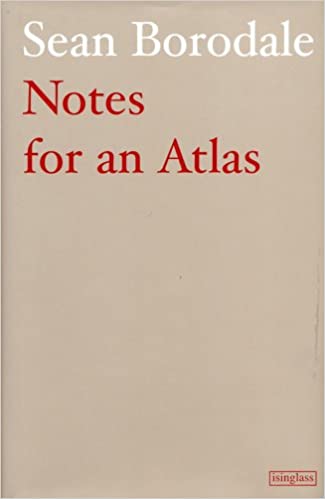 This book describes itself on the back cover by means of a quotation from Robert Macfarlane, recommending it in the Guardian: ‘An extraordinary 370-page poem written whilst walking through London.’

I think ‘poem’ is the right word, though it is not written in verse. The text is left-justified, the carriage returns determined automatically by the margin rather than chosen for effect, and so must count as prose. And very dense prose at that.  Divided into twenty-five numbered sections, Notes for an Atlas is otherwise unrelieved by paragraph breaks.

And if this is not enough to daunt the reader, it invites you to step into a very strange world indeed.  Here are the opening 100 words or so:

A man walks and he speaks, and every word warps in the wind in the street. See brambles, a blackberry still as a boulder suspended among thorns. Leaves broken as sawdust, curled and torn. A man wearing black clothes walks to a car, see lips clamped  See clouds reflected on car doors. See brown eyes and clouds banked, knotted and ripped. Wind ticking a maple, scratching the leg of a twig. See cracks in grey tar. Hear a tattered blue and white flag, the shrug and the quiet crack of its cloth in a turn of the air (p7).

This is not a quirky beginning to a narrative that eventually begins to normalize. The whole poem takes the form of a transcription of  things seen, heard (and read), usually announced by subject-less verbs. Nothing makes sense, not even in retrospect. And by this I mean, the connections between the different objects and events are entirely random, juxtapositions of the close up and far away, and separated by unspecified intervals of time, distances travelled, angles turned. It is impossible for the reader to create from these fragments a space in which one can imaginatively inhabit or orient oneself.

But this is one of the most compelling books I have ever read. It is travel writing pared down to its most basic ingredients. Notes for an Atlas makes even the sketchiest fieldnotes seem over-polished and prematurely analytical even while it depends on far more considerable artifice, for it aims to recreate a degree of fragmentation that we never spontaneously experience, so accustomed we are to converting our impressions into portraits, landscapes and stories even before they take place.

The author’s own website has little to say about the technique of composition. It is just possible that Notes for an Atlas is a work entirely of the imagination, devised with only the most indirect relation to walks actually taken in London. But I find it hard to believe that any imagination wouldn’t crumble in the face of having to recreate such inexhaustible banality. The most likely scenario would be that Borodale undertook several long walks in the capital – perhaps twenty five of them – while recording his immediate impressions as he want along, possibly speaking into a microphone (that opening sentence may be a self-portrait), maybe even using a concealed camcorder.  The poem would be a – probably much worked-on and revised – transcription of these impressions.

If so, it seems likely that the original sequence of these impressions survives in the written work.  From the fragments it is often possible to deduce something about where and when they are occurring, for instance  the density of the built environment, whether the location is busy or quiet, whether it is night or day.  Deprived of proper names (which only appear in the text if the poet overhears them or sees them written down – and then only rarely), the reader struggles to identify locations and occasions, though it would appear that the poem documents a solemn public event (perhaps Remembrance Day at the Cenotaph or a state funeral) (section VI), a visit to the zoo (presumably in Regent’s Park) (section VIII), a walk through an art gallery (section XV), and an encounter with an anti-war demonstration (section XXII).  Names of businesses, streets, buildings occasionally offer clues.  ‘A giant wheel in the sky with thin spokes’ (p220) suggests the London Eye. But it would be impossible to reconstruct the itineraries followed here.

The text forces us to break the habit of reading prose that finds causality or explanation implied in the transition from one clause or sentence to the next. In fact one can not even be sure of proximity, since the focus and direction seem to be always changing. And these changes are quite unpredictable because there is no ‘I’ to lend them coherence. The poet adopts the persona of an invisible man (who never seems to see reflections of himself or hear his own footsteps, and gives no indication that he is perceived by others) who betrays no feelings or inclinations of his own. He is almost, in fact, a machine. Or an alien. And this impression is reinforced by the deliberately restricted vocabulary of the poem, which (when not transcribing the words of others) often resorts to descriptive phrases rather than specific nouns, as if to emphasize the radical innocence of his perception, referring for example to a man ‘moving on wheeled shoes’ (p241) as if roller-skates was a term he had not learned or would betray too much speculation regarding something not directly seen.

So what is the best way to read Notes for an Atlas? When I first obtained a copy of the book I did read it from beginning to end, though slowly, probably no more than ten pages a day. Perhaps there was a story here, or a mystery that would be unveiled, or some recurrent motif that I would miss if I didn’t painstakingly turn every page in order. If you take pleasure from the discipline of an exercise regime – doing just enough each day to make a difference, but not too much it becomes a chore – this approach has its benefits. But since there is no suspense, no climax, no dramatic change of key or tempo, what makes reading it possible at all is the texture of its language, which you can appreciate by dipping in and out at any point.

It’s best enjoyed by speaking it aloud, I think. Try those opening lines again, listening to the way the repeated words (‘and’, ‘see’) and word-endings (‘-ing’, ‘-ed’) give it flow, while the sentences build, getting longer, before getting shorter again. The rhythms are uneven – there is no time signature here – but there is an ebb and flow, a rising and falling, like the tide or the wind, that suits such an epic (and attracts the praise of a ‘nature writer’ like Robert Macfarlane).

But what really transforms this poem from an intriguing, dare-devil stunt of largely academic curiosity is its imagery, particularly the way the poem is fuelled by an apparently inexhaustible stream of metaphors and similes: ‘blackberry still as a boulder’, ‘leaves broken as sawdust’, ‘clouds banked, knotted and ripped’ – the first half-page sets the tone immediately. Some of them are routine, but many may make you smile at their freshness and pertinence, and often I would be forced to pause and admire their humour or sheer audacity.  Here the labour of transcription – the work that recreates the walk on the printed page – is abundantly on display.

These are some of my favourites:

See a snail-sized mound of red-brown on pavement, the closed palace of a dog’s excrement (p281)

Sometimes they come thick and fast you can hardly keep up with them:

… and a chocolate wrapper lies curled on its side like a sleeping man. See the grain of stone flecked with shapes like grains of wheat blackened with fungus and cast iron railings rise planted in stone like the edge of a wheatfield.  A man’s head swivels its neck, see the eyes are sharp like a hawk’s. Pass black window glass like obsidian sheets. Glimpse a dark garden, dark green and black leaves like carved jade and slate, lacquer of rainwater … (p252).

At such moments there is almost a doubling – even eclipsing – of the immediate everyday world apprehended by the senses, with another world populated by anonymized memories, dreams and ghosts. Into a mundane London street arrives a sleeping man, a wheatfield, a hawk, carved jade, obsidian sheets from the cultures and histories filtered by the poet’s imagination. Somehow, in the midst of what seems to be a hyper-naturalist transcription of strenuously un-interpreted sense impressions, emerges a magical realism of considerable beauty.

The books ends with a farewell, the parting dialogue between a man and a woman.

And a man with a woman smiles and she smiles and they both stand quiet in smiles as many walk in different directions. Air thick with fumes in a grey. Hear, ‘God no.’ A dark hand lands like a clamp on a wrist with a shake. hear ‘Wonderful to see you, is she all right?’ Hear, ‘Great, absolutely.’ Hear, ‘Well I think we have actually, it’s nerve-wracking … oh.’ Hear, ‘God, well I hope so … bye bye.’ Hear, ‘Bye bye Murph’ (p372).

I wonder if there isn’t a hint of mischief here.  As if this is also an imagined exchange between author and patient reader, who, having read thus far, might admit to finding the experience ‘actually … nervewracking’.  And the author, of course, would be bound to reply: ‘God, well I hope so.’  And thus they part, on the best of terms.